We are delighted that our latest release, Handel’s Samson, has been listed as a highly recommended recording in Scherzo magazine for March 2020.

John Butt has created the best Samson ever.

Read the full review in the December issue of BBC Music Magazine.

John Butt really does excel at these explorations of monumental major works; the performance is wonderful, while the level of historical and musical enquiry further enriches our appreciation.

Today… I’m plumping for Samson: for its superb solo team… its thrillingly immediate choral singing, and the mingled gravitas and theatrical urgency of John Butt’s direction.

Read the full review in the December issue of Gramophone.

It is unprecedented for an unabridged Samson to nail its enigmatic challenges… [its] manifold musical details, incremental theatrical tensions, literary subtleties and emotional trajectory…

Read the full review in the December issue of Gramophone.

A taught, exciting reading with the very finest performances and top notch sound…

We were delighted to be included on Presto Classical’s shortlist of top recordings for 2019. Samson now joins earlier Dunedin projects like Bach’s Christmas Oratorio, Monteverdi’s Vespers and Handel’s Esther as a Presto Classical recommended recording.

We are delighted to announce that our latest recording, Handel’s Samson, has been nominated in the ‘Best Baroque Vocal’ category at the 2020 International Classical Music Awards.

We are delighted to announce that shortly after its release in late October that our recording of Handel’s Samson was ranked #13 in the UK Specialist Classical Chart of w/c November 1st 2019.

As the classical music world gears up for the Royal Philharmonic Society Awards on Wednesday 9th May, we have been looking back at our favourite moments from 2017 and celebrating the many reasons why Dunedin is shortlisted in the Ensemble category. From Edinburgh to Leipzig, Waltershausen to London, we look back on an extraordinary year.

Where else could we start but with our BBC Proms debut from 20 August 2017, a performance of Bach’s John Passion ‘that shed new light on the work by carefully contextualising it’ (Guardian).

In June 2017 we performed in the magnificent Nikolaikirche as part of Leipzig Bachfest. What a venue – and what a spectacular occasion.

On 5 August 2017 we had the honour of opening Edinburgh International Festival’s series at The Queen’s Hall, Edinburgh with a programme exploring connections between Schütz and Monteverdi.

In September 2017 we ticked a huge item off our bucket list when we traveled to Waltershausen,Germany with Iestyn Davies to perform a programme of Bach and Handel on an original Bach organ.

In April 2017 we enjoyed our first collaboration with Kristian Bezuidenhout, who directed from the harpsichord in three Matthew Passion performances across Scotland.

‘The solo instrumental playing in this performance was unwaveringly stunning’ (Herald)

September 2017 saw the release of our Monteverdi Vespers 1610 recording, which has earned a glut of 5 star reviews.

‘Stripped back performances that are fresh and luminous, lithe and alive’ (Herald – Top 20 Classical Albums of 2017)

In April 2017 we were thrilled to be part of James Runcie’s BBC Radio 4 drama exploring how Bach’s Matthew Passion was written, composed, rehearsed and performed in the build-up to its first performance in Leipzig on Good Friday 1727.

7 days, 7 highlights from 2017, 7 reasons why we have been nominated for an RPS Ensemble Award.

This performance, joyously free of eccentricities, interested only in the honest, beautiful expression of music and texts, is heavenly.

Read the review in full here.

Dunedin Consort has been shortlisted for an RPS award, one of the most prestigious in the UK music scene, in the Ensemble category.

Over 50 musicians, ensembles and organisations nationwide are in contention for this year’s awards, which celebrate outstanding music making in 2017. The shortlists reveal a kaleidoscope of musical talent, invention and imagination, whether in the concert hall or on the opera stage, in the community or online, in written word, film or for the first time, via virtual reality. From nearly 400 nominations in 13 categories, the 65 independent, expert jurors have chosen this year’s shortlisted nominations. 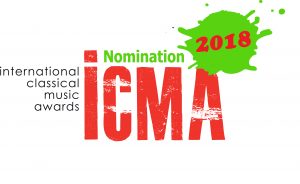 We are delighted to reveal that our Monteverdi Vespers 1610 recording has been nominated in the ‘Best Baroque Vocal’ category at the 2018 International Classical Music Awards.

The Award Ceremony and Gala concert will take place on April 6 2018 in Katowice, hosted by the National Polish Radio Symphony NOSPR.

Read more about the full list of nominees here.

Recording of the Month:

This Christmas Oratorio is another mightily successful feather in [Butt’s] cap. His small but perfectly formed team of experts, make a crack team when it comes to this music…there is a tremendous sense of excitement in this performance. A marvellous seasonal gift.’