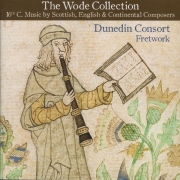 Dunedin Consort has joined forces with Fretwork and The University of Edinburgh to explore the musical psalms collected by Thomas Wode.

Wode was determined to record and preserve as much as he could of the music of his time, whether composed by Scots or by English and continental composers known in Scotland.  The resulting collection of songs provides a unique insight into musical life in Scotland in the second half of the sixteenth century.

‘The Wode Collection’ features works by well-known composers such as Thomas Tallis, Giovanni Pierluigi da Palestrina and Orlandus Lassus, alongside lesser known composers and a host of anonymous works.  The nuances of the pieces are highlighted by the talented Dunedin Consort singers with their celebrated one-voice-to-a-part delivery.  Enter the fascinating world of sixteenth century Scotland in Studio Master 192 quality today.