Ahead of our upcoming The Trials of Love concerts, we caught up with soloist Matthew Brook who talks about the thrill of storytelling, the challenges of singing in Italian and that bad boy Apollo!

What can you tell us about this programme of music?

The title of the programme says it all! We are all affected by the trials of love, whether it be within a family setting, a romantic setting, of breakup, of passion, desire, hope, denial, loss. If you think about it, it’s our human existence!  So plenty to ponder on in the programme. There’s music with words, music without words, but all of life is there in every bar. Come with an open heart and see where the music takes you.

What are you looking forward to the most in this concert?

As with all concerts, the thrill of being able to tell a story to an audience always gets my juices going. If a piece is in a foreign language, then I have an extra level of responsibility to tell this story clearly.

In this programme my character is a larger than life, overconfident and brutish Apollo. He’s a show off!  And he’s determined to try and win over the beautiful Nymph come what may. So I relish the transformation that happens in the piece, from selfish big head to quivering remorseful wreck.  All singers and actors like that challenge!

Is there anything particular the audience should listen out for?

Handel’s word painting and mood setting is masterful in Apollo e Dafne. There’s plenty of  “show off” music in the first section of the piece. Then there’s the peaceful pastoral poise of Dafne’s first appearance. A delicious moment.

Look out for the “wooing” in the recitatives. There’s a hidden strength in Dafne’s answers.

Then we build up to a high speed duet one voice determined to win over one. The other determined NOT to be beaten.

Then we have a mocking aria, saying, ‘you might be beautiful now, but that soon passes!  Better partner off with me before you lose it hun!’

There are spiky rose thorns in the accompaniment of this outwardly enticing music.

Dafne is always on top of the situation though. Her music never waivers. Then it’s clear Apollo is getting nowhere, so he resorts to force, and chases Dafne. All, of course, to no avail!

Then Transformation into a laurel tree music

Then a most moving final aria where Apollo finally breaks and realises his foolishness. 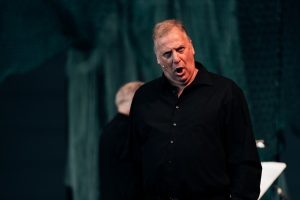 What are the challenges of singing in Italian?

Singers learn the nuances of language throughout their careers. Some are quicker at it than others. Some had good schooling and understood the structures of sentences. Others have to spend a bit more time on it. I spend most of my spare time trying to get better at languages!

English speakers tend to express more through the consonants. Italians tend to  more focus on the vowels for expression. For example we would say “ I LLLLove you” if we wanted to make an impact. An Italian would say “ I LOOOOOOVe you.”

Once this rule sinks in, you stand a better chance of sounding like an Italian speaker. It’s a life long game and I love the challenge of it. That doesn’t mean to say Italians don’t do consonants!  It’s just that the balance is always firmly on the vowels side. Open and closed e’s (Eh/ay) need care and there’s no quick way to know whether they are open or not. You’ve just got to learn them.

I always take copious notes during rehearsals when I’m working abroad.  I listen to the native speakers with full concentration. And I enjoy hearing them inflect their words, seeing how they emphasise text. It’s fascinating. And MUCH more interesting than looking at your mobile phone when you’re not singing!

The way a region colours its language is often mirrored in the music it produces. Think of Russian music, Hispanic music, Scottish Music, Welsh, Irish, English. They all have their rhythms and colours. A composer has to have such a gift in knowing how to set these languages if they are going to be successful. Handel only had a few years in Italy but I think he understood the language very well. It’s a joy to sing.

Join Dunedin Consort for The Trials of Love at

John Butt and The Trials of Love

Anna Dennis and The Trials of Love
Scroll to top