Tell us a bit about yourself. Where are you from? How did you get into playing the trumpet? 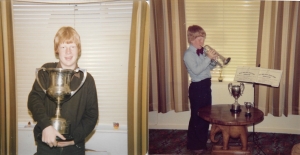 I took up the trumpet aged nine, following in the footsteps of my grandfather, who was a bandmaster in the north east. My early days were spent playing the cornet in Loughborough Band under the great taskmaster Bud Fisher. I eventually took up the trumpet, inspired by another member of the band, David Archer, who had gone on to study at the Royal Academy of Music.

My school music teacher, David Fisher, was also a trumpet enthusiast and introduced me to famous recordings by great trumpeters, including albums by the one and only Maurice Andre.

I was taught the trumpet by Don Blakeson and played in the Leicestershire Schools Symphony Orchestra, before going on to study with Michael Laird at the Royal College of Music. This is where I first started to learn about the natural trumpet. After intensive practice, I performed Bach’s second Brandenburg Concerto there in my final year, which was the first time the concerto had ever been performed on a period instrument at a music college in London.

Brandenburg 2 has been described as the Baroque trumpeter’s Mount Everest. What is it that makes it such a challenge? 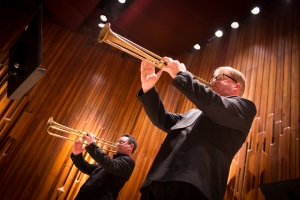 Playing Brandenburg 2 is perhaps the greatest test of stamina in the entire classical repertoire for a trumpet player, and represents the pinnacle of writing for the trumpet in the Baroque period. Learning to play it requires a huge amount of preparation, both physically and mentally. I would equate it to running a four-minute mile. It is only relatively recently that it has started being played again on the natural trumpet (the instrument for which it was written).

Modern performers use a piccolo trumpet, which is much shorter in length and has valves. This produces a much brighter sound which doesn’t blend as well with the other solo instruments, and tends to dominate the entire texture of the piece. The natural trumpet is almost three times as long as its modern counterpart, making it much harder to play in the higher register — but means that it blends better, as it produces a rounder sound. It also only has the notes of the harmonic series to rely on which means certain notes need to be bent in tune.

Playing this concerto requires incredible breath and lip control, and I find that it pays to treat it with great respect and not try to mix playing it with too many other styles of playing — especially in the build up to a performance. This is because it requires a very special technique to play so delicately in the upper register on such a long instrument.

Other than Bach (of course), what’s your favourite repertoire to perform?

When I’m not performing Bach, I really enjoy playing on lots of other period instruments that can produce an extremely diverse range of sounds, such as the keyed trumpet, the slide trumpet and many others — particularly from the 19th century. I’m particularly interested in how brass instruments grew to mimic the human voice and how they became extremely expressive throughout their development, while at the same time symbolising power and strength. I love listening to Jazz too. I’m fascinated both by the incredible ability of the players and how the music has developed over the last 100 years. 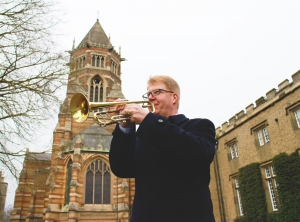 Back in May 2018, you played to a worldwide audience, when you performed at the wedding of Prince Harry and Meghan Markle. What was that like?

Playing at the Royal Wedding was, of course, a great honour. It was amazing to be asked to do it! With a live global audience of 1.9 billion, I was naturally anxious to play my best, and I bought a new trumpet specially for the occasion, which I felt was perfect for the piece I was going to be playing, Handel’s Ete

rnal Source of Light Divine. On the morning of the wedding, all of  the musicians were given a police escort from Buckingham Palace to Windsor Castle. It felt surreal as motorbikes zoomed in front of us, stopping all the traffic in West London. As I waited to play in the chapel, Harry and William walked by and we wished each other good luck! With only a few minutes to go before Megan arrived, I had a ‘Harry Potter moment’, when I somehow felt both my parents at my side willing me on, and knowing how proud they would have been of me.

What do you get up to when you’re not playing the trumpet?

When not performing, I like to relax by going trout fishing or playing golf. I also enjoy walking with our two Miniature Dachshunds.

Catch David performing Brandenburg Concerto No. 2 – along with the other five! – at The Queen’s Hall on Saturday 18 January. To book, click here.

The Brandenburgs – Seen and Heard International Review
Scroll to top